Cells from fat mend bone, cartilage, muscle and even the heart.

© Society for Science & the Public 2000 – 2016. All rights reserved.
Adipose tissue is a natural storehouse of healing cells

Most people would be happy to get rid of excess body fat. Trade the spare tire for something useful — say, better-functioning knees or hips, or a fix for an ailing heart or a broken bone. The idea is not far-fetched, some scientists say. Researchers worldwide are repurposing discarded fat to repair body parts damaged by injury, disease or age. Recent studies in lab animals and humans show that the much-maligned material can be a source of cells useful for treating a wide range of ills.

At the University of Pittsburgh, bioengineer Rocky Tuan and colleagues extract buckets full of yellow fat from volunteers’ bellies and thighs and turn the liposuctioned material into tissue that resembles shock-absorbing cartilage. If the cartilage works as well in people as it has in animals, Tuan’s approach might someday offer a kind of self-repair for osteoarthritis, the painful degeneration of cartilage in the joints. He’s also using fat cells to grow replacement parts for the tendons and ligaments that support the joints. Foremost among fat’s virtues is its richness of stem cells, which have the ability to divide and grow into a wide variety of tissue types.

Cells from fat are being tested to mend tissues found in damaged joints, hearts and muscle, and to regrow bone and heal wounds.
Sources: D.M. Minteer et al/Clin. Plastic Surg. 2015; A.J. Leblanc et al/Stem Cells Transl. Med. 2013
The stem cells in fat share the medical-worthy spotlight with a few other cells. Along with the fat-filled adipocytes that store energy, fat tissue has its own blood supply and supporting connective tissue, called stroma. The stroma contains blood cells, immune cells, endothelial cells that line the inner surface of blood vessels and pericytes, which line the outer surface. These other fat-derived cells are proving to have therapeutic value as well. Plastic surgeon J. Peter Rubin, also at Pitt, says that the multitalented cells found in fat could prove to be the ultimate body repair kit, providing replacement tissue or inspiring repair of body parts that can’t mend themselves.
Much of the research — more than a decade of studies — has been in lab animals, but a few applications are being tested in human volunteers. Current clinical studies under way aim to provide replacement tissue to treat chronic wounds and diabetic sores, or conditions such as Parkinson’s disease, multiple sclerosis, chronic obstructive pulmonary disease and type 1 diabetes. Most clinical studies use the simplest approach: Harvest cells from a patient, then inject them in a single procedure.

In more complex approaches still in lab and animal testing, various cells in fat are extracted and manipulated to create custom treatments for worn-out or damaged tissues or to generate blood flow after a heart attack or replace bone in large fractures.

Stem cells can develop into various cell types, which makes them the focus of studies that aim to replace cells that fail because of disease, accident or age. Stem cells taken from embryos are more versatile than other types of stem cells, but their use is controversial. For that reason, researchers have studied stem cells from sources other than embryos, including bone marrow, muscle and blood. Fat tissue comes from the same embryonic tissue as bone marrow, a traditional stem cell source, so scientists reasoned that fat might contain similar cells.

They were surprised to find vast quantities.

Stem cells make up 2 to 10 percent of fat tissue.

A cubic centimeter of liposuctioned fat (about one-fifth of a teaspoon) yields 100 times as many stem cells as does the same amount of bone marrow, Tuan says.

And fat cells are easy to harvest — much easier than bone marrow.

One pound of fat removed from a patient’s abdomen can yield up to 200 million stem cells, a more than adequate supply for treatments.

Why fat produces so many stem cells isn’t clear, but Rubin points out that fat tissue serves several important functions.

In addition to storing and releasing energy, it helps insulate and protect the body’s internal organs.

“Like most tissues in the body, fat has a reservoir of stem cells to replenish cells as they die off or create new cells in response to growth or the need for more cells,” he says.

Fat produces so many stem cells, in fact, that for some applications — such as tissue-replacement or “fat grafting” — there’s no need to grow more of them in the lab.

He and other scientists think that the fat stem cells remodel tissue by releasing growth factors and communicating with surrounding cells in their new location — sending and receiving signals through chemical cues. As a result, the stem cells enhance the growth of new tissue and boost blood supply to surrounding tissue. So far, all of the patients have benefited from the stem cell injections, he says, though his group is still working on how much to inject for each patient.

The myStem ® device is CE, ANVISA and TGA approved and the company continues to expand its activities globally.

MyStem LLC is continuously involved in scientific collaboration with surgeon leaders in regenerative medicine in order to progress product development efforts to advance the ease of use in delivering best care to patients globally. 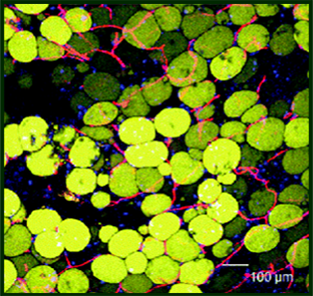 As you have read above soft tissue derived cells are very useful for several reasons but every collection method is both time-consuming and very expensive (cell labs).

Here where our MyStem proprietary technology could help.

The regenerative fraction separation process is based on the intrinsic parameters of cells in a liquid fraction according to fluidic laws.

No banned enzymatic digestion is performed.

After the simple few steps separation process is completed the concentrated MSC  suspension is ready for use.

(2) In vitro validation of a closed device enabling the purification of the fluid portion of liposuction aspirates.

(3) Stem cell yield of SVF of adipose tissue approaches 2% a very significant concentration compared to 0.002% that has been quoted for bone marrow-derived mesenchymal stem cells http://www.ncbi.nlm.nih.gov/pubmed/25361717